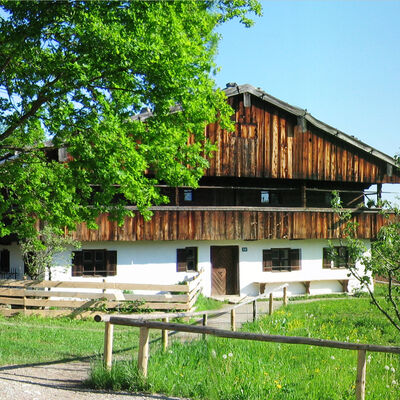 The Hoderer farm from Kochel was the first building exhibit to be reconstructed at the Glentleiten Open Air Museum, in 1973. The ensemble of main building and various large outbuildings shows a farm which functions as a self-reliant economic entity. The garden and fence correspond to the original arrangement.

One inhabitant of the Hoderer farm was the mayor of Kochel for 20 years (1882 - 1902): Johann Eberl bought the property from Elisabeth Krinner, who had never married, and moved in with his family. In order to give an impression of the size of the farm at that time, it should be noted that the property included 2.13 hectares of meadow, 5.5 hectares of arable land and 10.51 hectares of wet meadow in 1902. The records also show that one horse, six cows, two oxen, four to six lambs, five to six sheep, one to two pigs and around 20 chickens were kept on the farm around 1938.