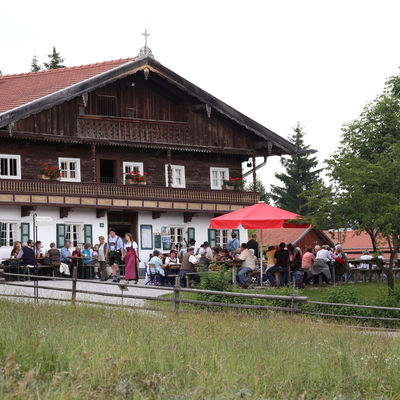 The single-roof farmhouse from Siegertsbrunn is presented today from an aesthetic perspective. Only the living quarters are from the original building. During reconstruction at the museum, the part where the residents used to work was rebuilt using blueprints from 1912 and components from various buildings.

A “Kramerladen” village shop has been installed for museum visitors at the Mesner farm, where the bedroom and pantry were originally located in Siegertsbrunn. As was often the case in Upper Bavaria, the shop can only be accessed from a corridor and not from outside. The counter and shelves in the “Kramerladen” are from Großweil. Wares were hung from the painted, wooden snake above the counter, which is a long-term loan from the Tittmoning heritage museum. Wooden snakes hanging in shops were a common sight throughout Europe until the mid-19th century. Agriculture in previous centuries was primarily about securing self-subsistence for inhabitants of the farm. It was not possible, however, to produce everything on the farm required for daily existence. The rural population bought products such as salt, sugar, coffee, spices, paraffin, tools and dry goods from the village shop.