Selected stops will give you insights into building and working traditions and the everyday life of past times. During your walk you will learn about upper class summer tourism at lake Tegernsee, about the labor-intensive operation of an alpine farm or how the whetstone makers at Unterammergau used waterpower for their craft.

The suggested tour will take about 2.5 hours. 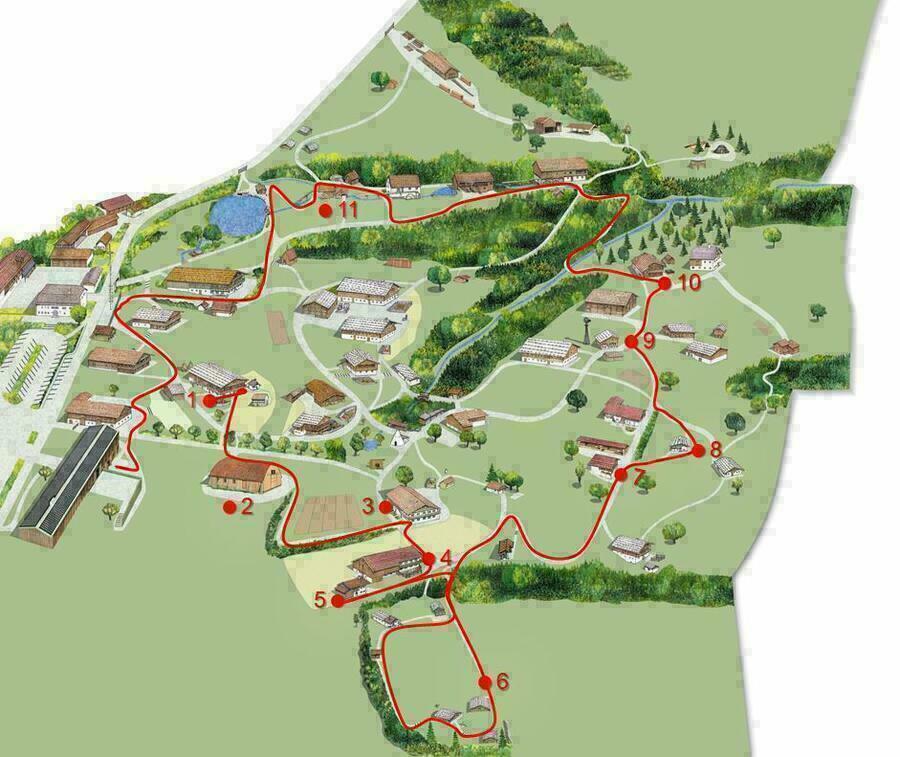 1. Home and property
Farm from Kochel (13) with adjoining buildings 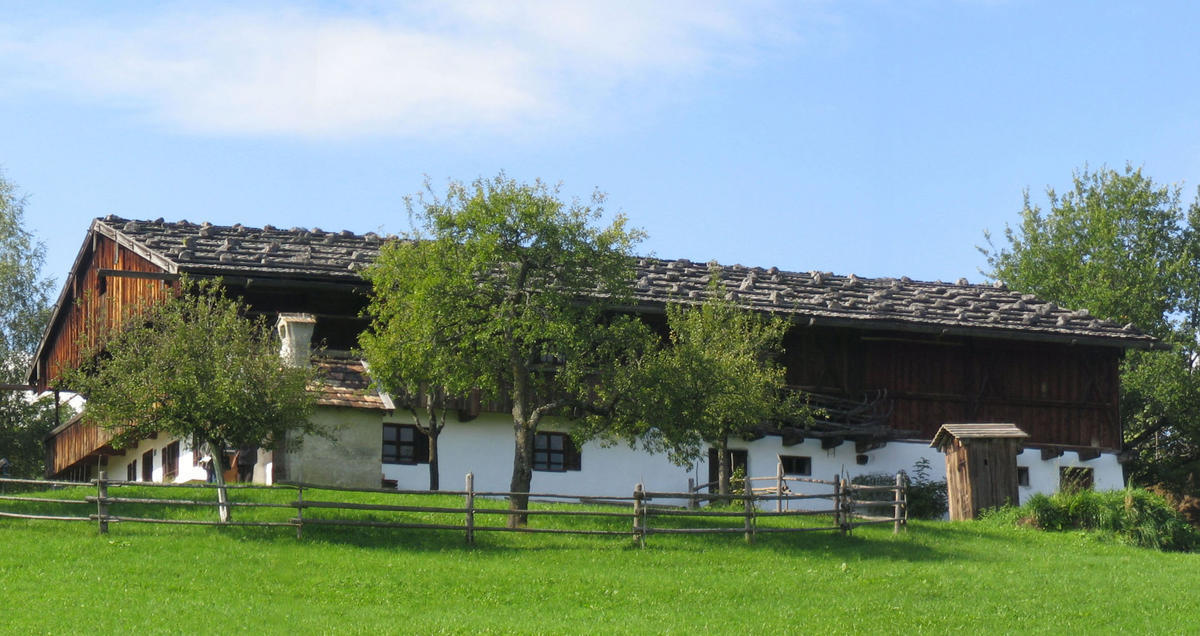 The Hoderer farm from Kochel was the first building exhibit to be reconstructed at the Glentleiten Open Air Museum, in 1973.

The “Hoderer” farm from Kochel was the first reconstructed building at the museum.In 1973 the farm, in former times operated on regular basis, was transferred to the Glentleiten. Furnishing was realized according to interviews with the last inhabitants and corresponds approximately to the situation of 1920. At the museum the property is presented as an ideal typical farmstead including granary (13a), bake house and drying oven (13b) and apiary (13c).

2. Roof of the future
System building hall from Warngau (T11) 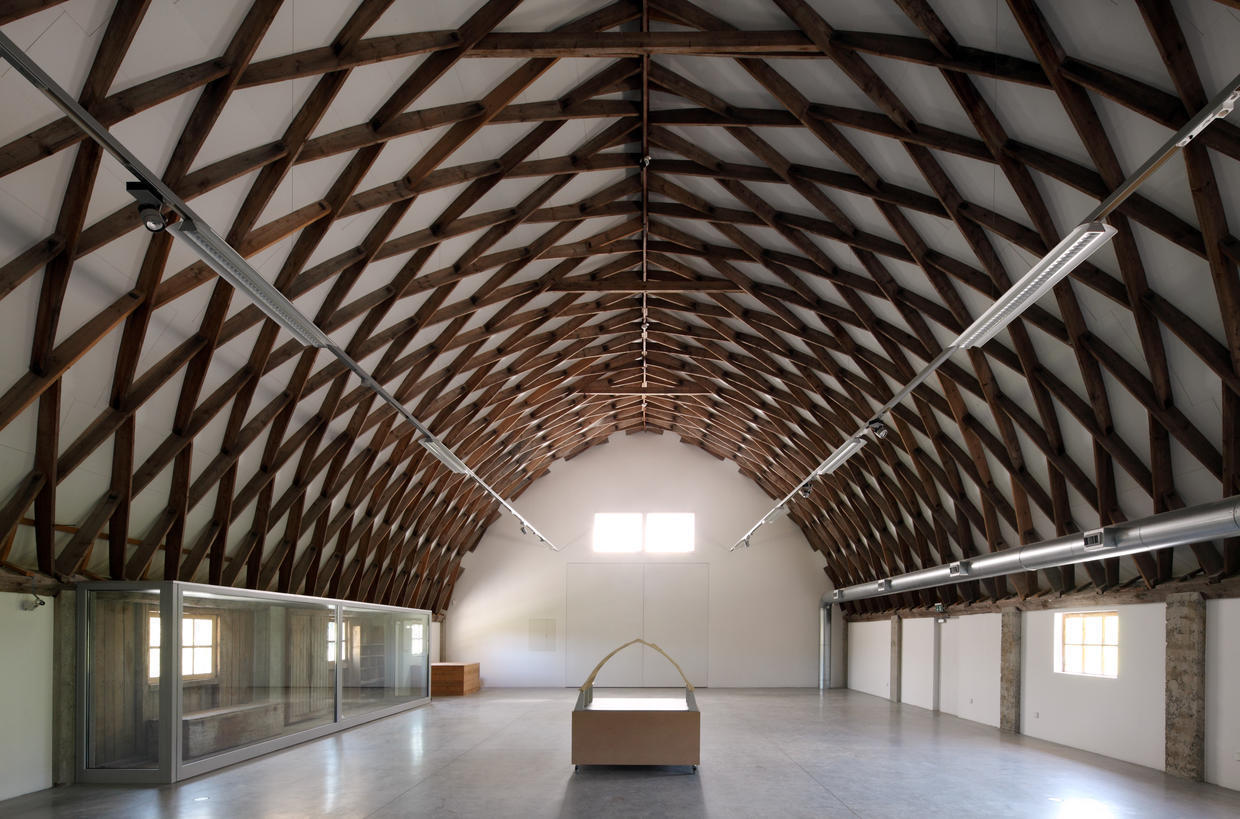 This hall, formerly built as a sawmill, is the largest building of the open air museum up to now. For the so called Zollinger slat roof, named after the inventor Friedrich Zollinger, 40% less wood was needed than for a traditional roof framework. The amount of work for production and assembly was reduced as well. At the museum the building is used as a multifunctional hall for special exhibitions and other events.

3. Hay and milk
Exhibition at the working part of the farm from Altenbeuern (22) 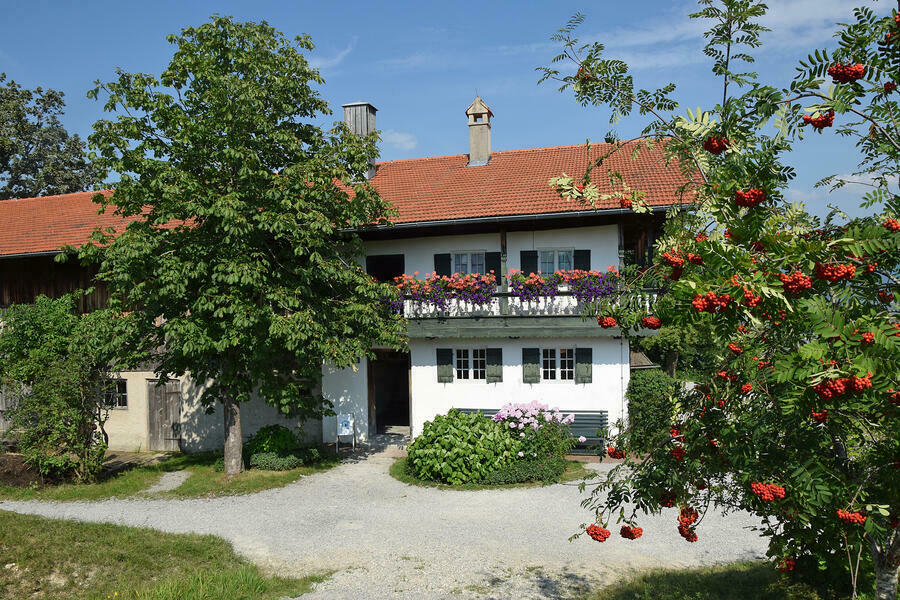 The house name Bachl is probably derived from Pächl, which is the name of the first documented family who lived in the farm.

Meadows and pastures shape the characteristic landscape of Upper Bavaria until today, in particular on the northern edge of the Alps. The exhibition “hay and milk” at the work buildings of the farm from Altenbeuren will inform you about grassland and livestock farming, and milk processing at the time before the mechanization of agriculture. A separate specific theme walk through the museum will start from there.

4. Summer retreat at the Tegernsee
Single-ridge roof farm from Rottach-Egern (32) 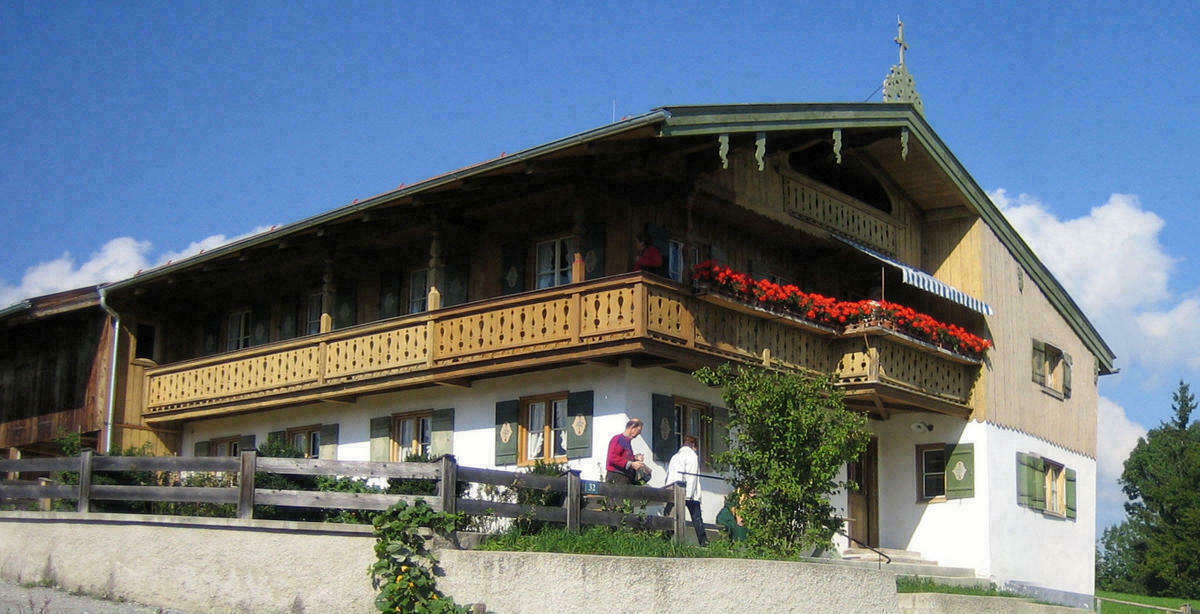 Rooms at the Fischerweber farm were let to summer visitors as early as the late 19th century. Along with agriculture and room letting, its inhabitants earned supplementary income weaving and distilling spirits.

As early as at the end of the 19th century, rooms were let to summer guests at the Fischerweber farm. See at the museum how wealthy guests and their servants were lodging during their summer vacation around 1930, and how the family furnished their house in the 1960s. Besides farming and providing accommodation, weaving and a distillery gained additional income at the “Fischerweber”.5. Ein Haus voller Überraschungen

5. A house full of surprises
Adjoining building of Fischerweber farm (32a) 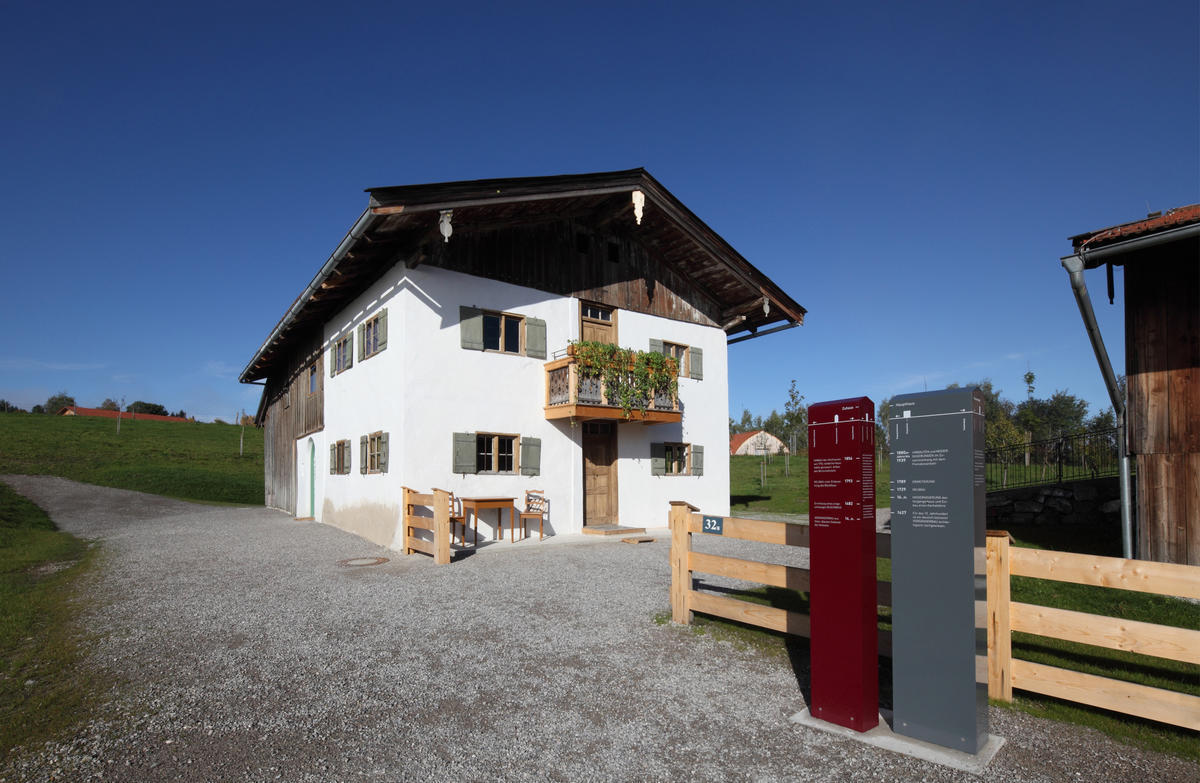 From the outside, the adjoining Fischerweber house seems like a plain two-storey, miniature single-roof farmhouse with living quarters and working quarters, in a composite design of wood and stonework; but the inconspicuous exterior hides an unusually complex building history, with spectacular discoveries from the late Middle Ages and early modern era.

The building appears quite inconspicuous from the outside, but is looking back to a changeful history of more than 500 years. The cottage, belonging to the estate of the Fischerweber, offers inside a distinctive feature, a two storied chapel, with rich interior dating from the late 15th to the early 20th century, like carved sculptures, artwork made of wax and glass handcrafted in monasteries, reverse glass paintings and souvenirs from pilgrimages. 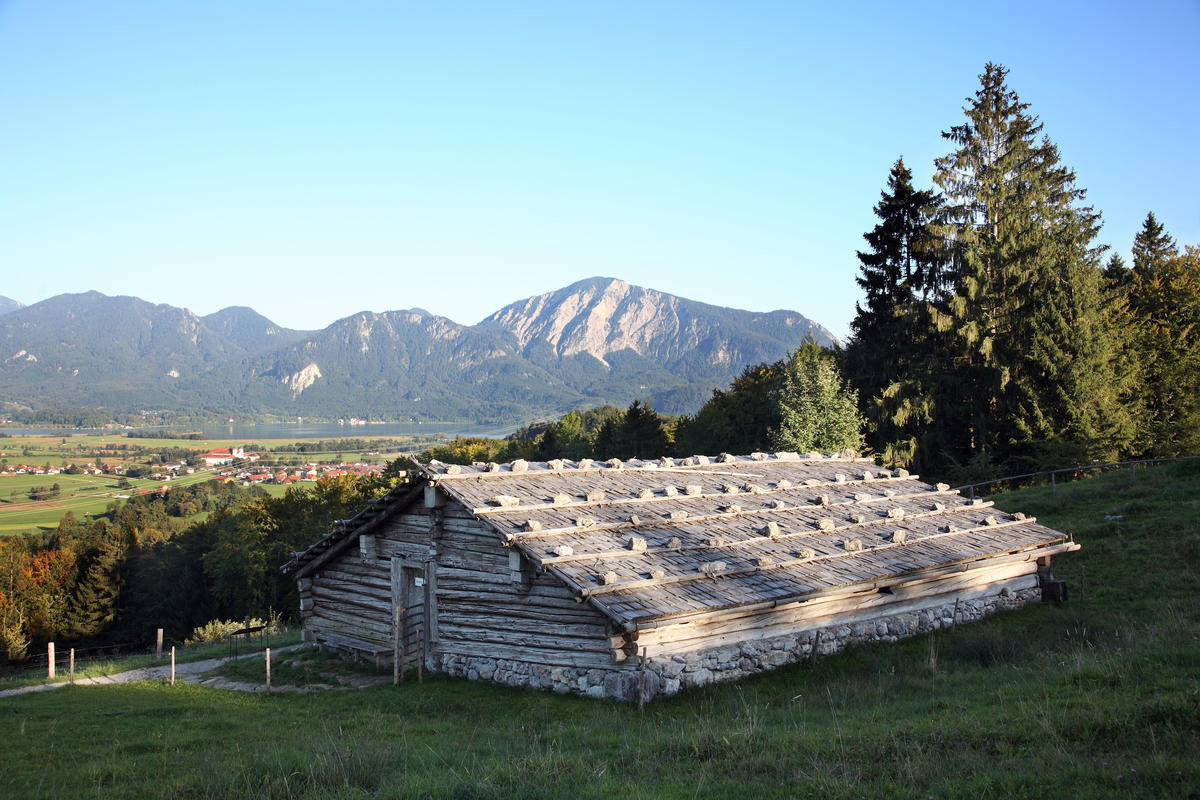 The «Hainzenkaser» building is one of a very small number of authentic, preserved cabins with internal living quarters. In this seemingly archaic building type, the living and working quarters are surrounded on all four sides by stables. This is why there are no windows in the cabin, with the only daylight reaching the interior via an open door.

At the “Rundumkaser” (all around alpine hut) the inside, the so-called “Kaserstöckl” with fireplace, bedstead and storage part is surrounded at all four sides by the stable for the livestock. This implies that the living quarters have no windows. The Hainzenkaser gives an example how an Alpine hut was furnished around 200 years ago and a dairymaid tells about her arduous live at an alpine farm. 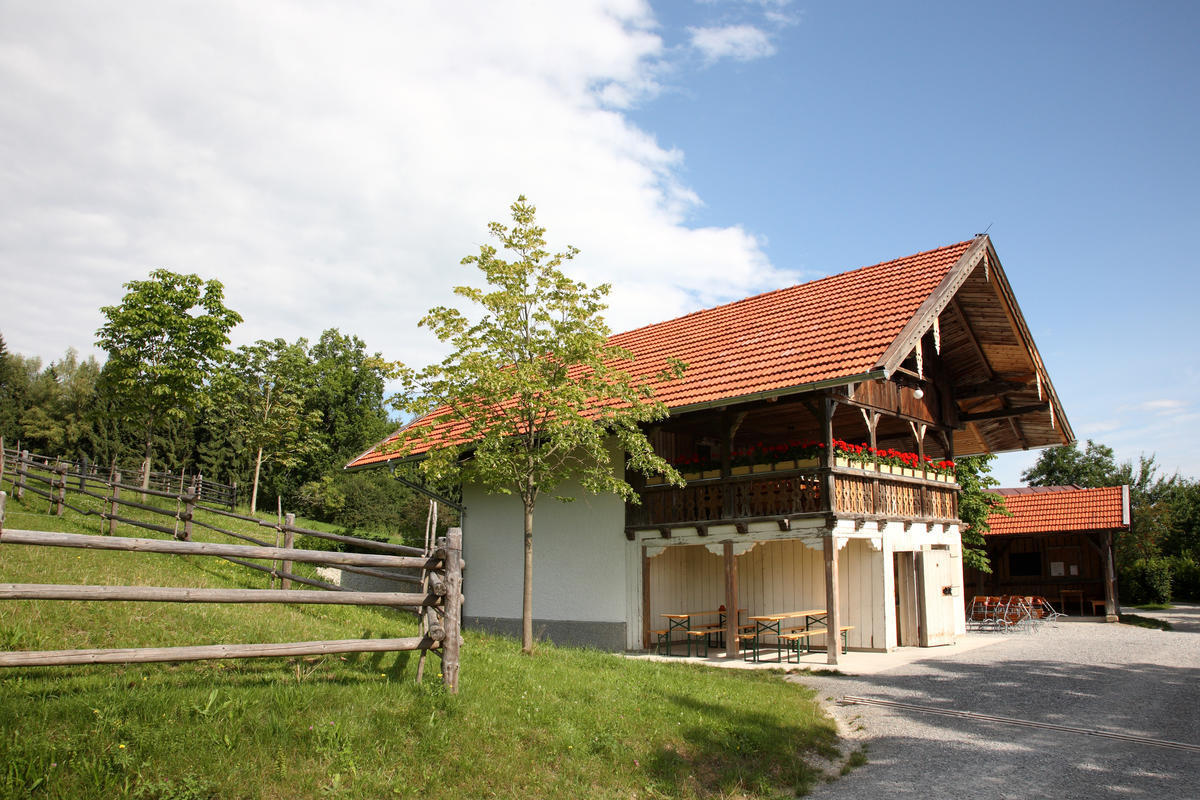 This ensemble consists of two buildings: a bowling alley and a veranda, or «Salettl»/pavilion, which both once belonged to the Staudham guesthouse. The veranda combined several functions under one roof: ice house, cold-storage room, bar and veranda. The former ice house is now a modern kitchen for the restaurant. The bowling alley can be rented out.

The ”Salettl“ including skittle alley was part of a big inn consisting of tavern, butcher shop and rooms for rent. Different functions were combined under one roof: Ice cellar, storage facilities, beer counter and gazebo. The beer garden is operating weather permitting. You will enjoy the impressive view over surrounding mountains, lakes and monasteries.

8. From a miners home to a vacation site
Small property from Oberau (54) 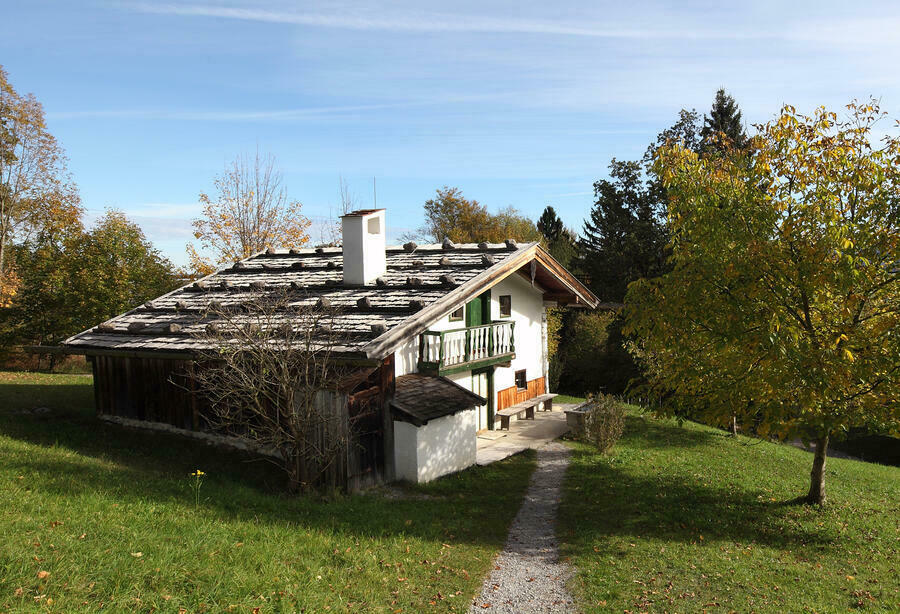 The plot name «Steinbichl» describes the location of the small property, which had barely any land, on a stony, barren mountainside. As its inhabitants did not cultivate the land or keep any livestock, they were exempted by the landlord, the Augustinian monastery in Berchtesgaden, from the taxes in kind which would usually have been payable

The „Steinbichlhäusl“ was never a farmstead. The owners worked as miners in the salt mine at the Dürrnberg, close to Hallein. For additional income, the families produced simple wooden toys in their home such as whistles shaped like horses and small cricket houses as well as splint boxes. Since 1970 the house was used as a vacation cottage for 20 years. To increase comfort a shower was installed into the former outhouse – if the weather was nice they even had hot water. 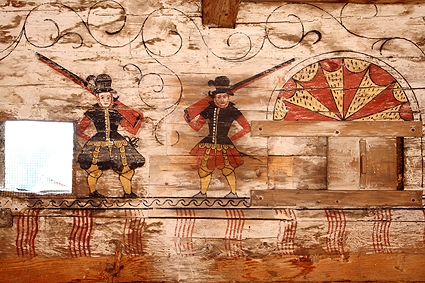 The granary belonged to a stately and isolated farm called Mooser and was built as a detached, two-storey log assembly structure in 1512.

The granary belonged to the estate of the Mooser, an isolated farm of stately size. It was built as two-story detached building. Have a look at the unusual wall paintings on the upper floor, showing scenes of the live of the gentry, architectural subjects and ornaments. An inscription reads 1575 as date of origin of the paintings. 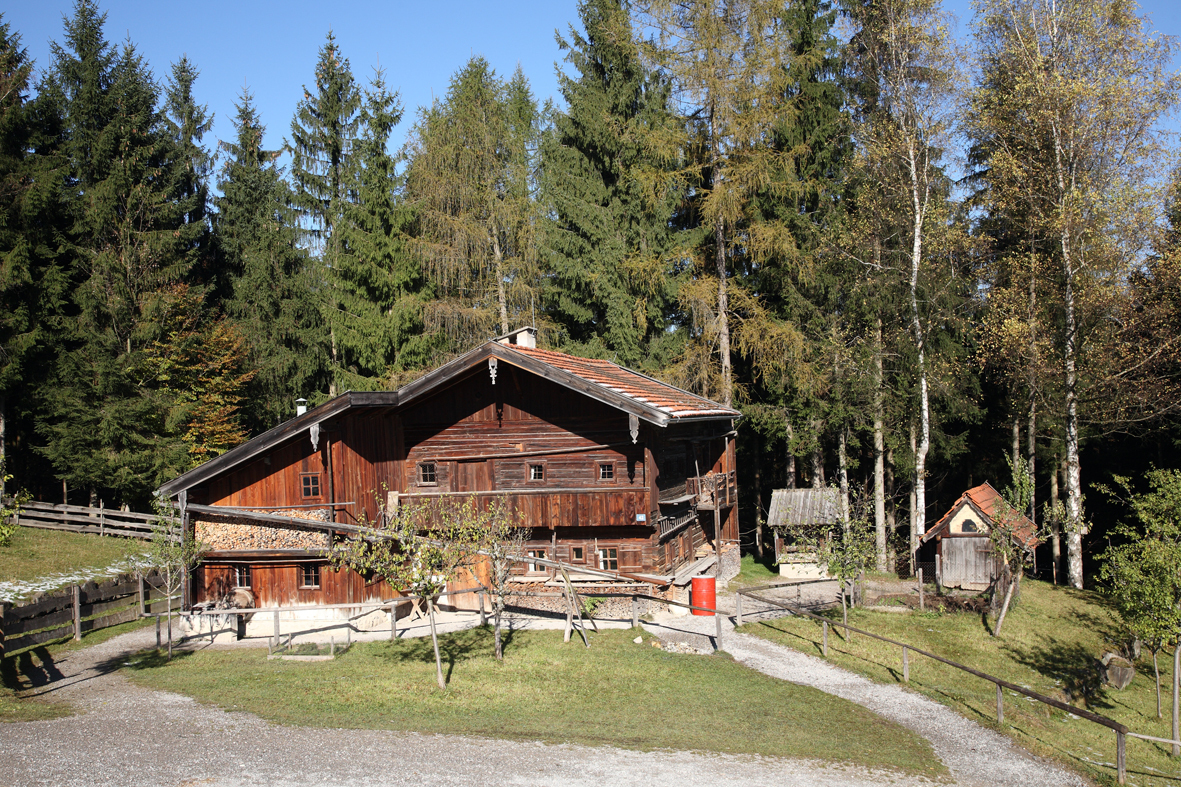 When the building was taken on by the Open Air Museum in 1991, it had seen no essential structural change for approximately 90 years. The furnishings had barely been modernised since then, either, and the well and baking house were still in place. This rare integrity means that the Weber house is a special historical record.

In order to secure their living the inhabitants needed additional income from a craft or trade besides farming and worked as weavers or carpenters. There was no electricity in the house until the last inhabitant died in 1981. At the museum, we show the “Weberhäusl” with the almost complete original furnishing from the early 20th century. 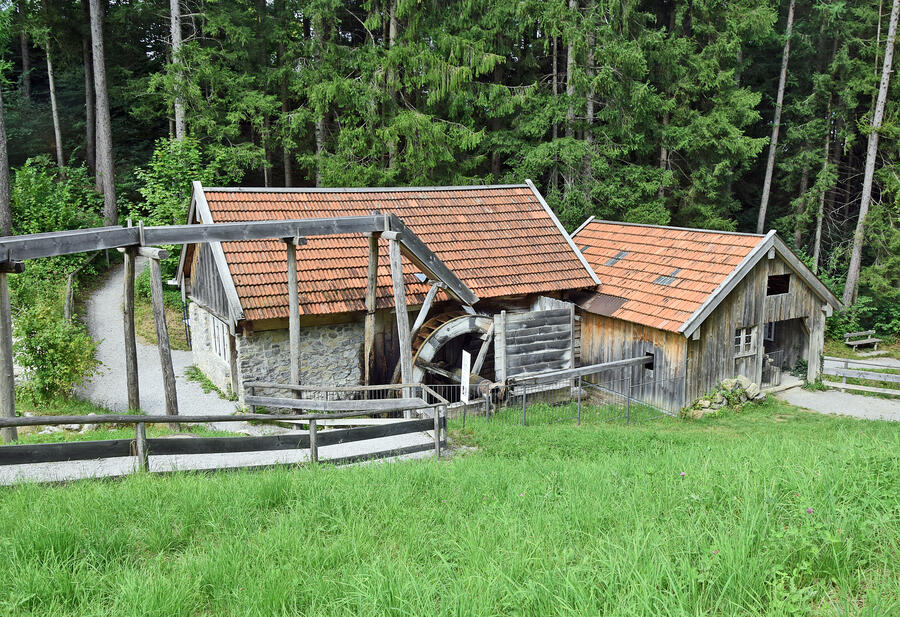 The «Whetstone workshop» building group consists of the grinding and sanding hut, a hewing hut and an earth storage cellar.

In this plant whetstones were manufactured, needed at every farm to sharpen sickles and scythes. Up to 200.000 whetstones per year were produced at Unterammergau and exported as far as Austria and Hungary. In a film, the last whetstone maker of Unterammergau is demonstrating the different steps, necessary to manufacture a whetstone.