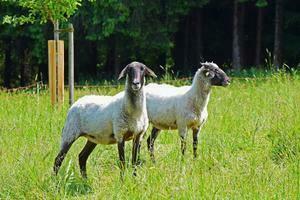 The Alpines Steinschaf (tansl. "alpine stone-sheep") is one of the oldest breeds of sheep. It is directly derived from the extinct Zaupelschaf and superbly adapted to the difficult high-mountain terrain and climate. The animals are small and light and have hard hooves which provide sure footing on stony ground. The wool mixture of coarse guard hair and fine wool fibre, which can be any colour, protects the body from the rainy alpine climate.

This is how the animals can use elevated mountain areas which are inaccessible to cattle. The Alpines Steinschaf was distributed throughout the whole of the eastern Alps. There were more than 200,000 animals just over 100 years ago. With approximately 850 examples in Bavaria today, they are one of the most endangered sheep breeds. 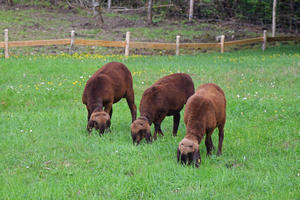 The Bergschaf (tansl. "mountain-sheep"), with its various strains, is the typical sheep breed in the Bavarian and Austrian alpine regions. With its hard hooves, head for heights and sure-footedness, this breed is able to use high mountain pastures up to the snow line. At this altitude, the animals have to overcome stark differences in temperature and periods of hunger following sudden changes in the weather.

The Bergschaf is derived from the Zaupelschaf, the Steinschaf and, in particular, the Bergamasca sheep of northern Italy. There were originally numerous different strains which were integrated and standardised in Germany in the 1930s.

The brown Bergschaf is slightly lighter than the white Bergschaf. Both breeds are considered highly endangered.